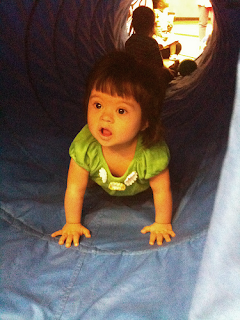 did i tell you that maya is cruising?! she really is! i'm sure i mentioned it a couple of days ago, but i can really see it now. just in the last two days i've noticed so much progress.

at gym class in the morning she crawled through a tunnel! she stopped in the middle and had a little conversation with a classmate. of course she tried grabbing her hair twice. luckily the other little girl had no big reaction. then maya moved on through the tunnel. it was cool!

later in the afternoon when we went to the play area in the mall, she was actually cruising from one end of the bench to the other. she was trying to get to a purse. for some reason she loves bags and purses. 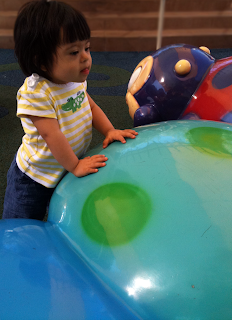 then today while we were lounging around at home i stood maya up at the couch and she immediately started to shuffle her feet to the left. she was really working hard to get to her favorite book, "the wheels on the bus". it was awesome!

the icing on the cake was when she crawled over to the fireplace, pulled up to stand and reached for the nesting blocks without anyone helping or nudging her. she proceeded to sit down and stack 4 blocks on her own. i have never ever seen her do that before.

it was just glorious!
Posted by evrfwd at 8:00 PM