two things happened today worth noting. the first is that maya got a haircut today. on a whim i decided to take maya to get a trim because quite frankly i'm no hairdresser. my grandmother used to cut my brothers hair as well as my hair for years and years. i even have a photo of one of them getting a haircut when he was a little boy in my grandmothers kitchen. it's a classic photo with my grandmother wearing 50's looking glasses. as i do with many things i try to document these events, although since it was a spontaneous discussion i didn't have a proper camera. thank goodness phones have cameras!
i should preface the photos by saying that the last and only time we took maya to get her haircut, she totally freaked out. it really surprised us because we had never seen her react that way. the whole time she was crying and signing "all done". we were so sorry to put her through that, that i opted to cut her bangs since then. but her hair had become so out of control...it was time.
surprisingly she didn't do too bad, she did fuss and cry about 90% of the time though. the photos i took are not as cute as the photo of my brother and grandmother but at least it is documented. 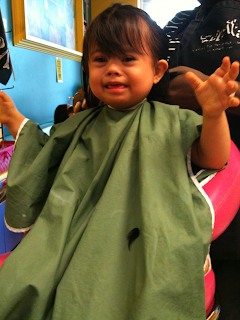 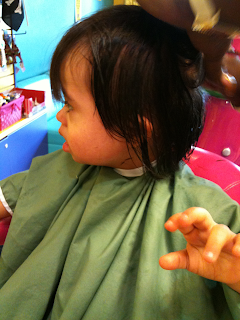 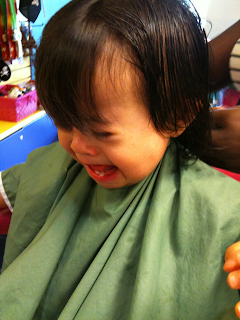 the second thing noting today happened at dinnertime. as our little family had dinner together, maya suddenly broke out with her verbal "dada" word. she has been saying dada for a while now so that part didn't surprise me, it was the fact that as she said it, she was signing "dad". i didn't want to get too excited at first because i thought maybe this was just a coincidence, but when she did it two other times after we acknowledged her i was so happy. at that moment i realized she was connecting her voice, a word that she spoke, to a sign that she did. wow! it totally caught me off guard. that was a sweet moment in time. kudos maya!
Posted by evrfwd at 8:10 PM

You go Ms Maya.....surprise your mom some more :D