a mother's courage: talking back to autism

a mother's courage: talking back to autism

thought i'd write a little something about a documentary i watched recently. i just happened to find it on hbo and dvr'd the movie. the music was amazing and the way they played out the story was so beautiful. it was real and down to earth...and in the end very encouraging.

A Mother’s Courage: Talking Back to Autism (a.k.a The Sunshine Boy), a documentary by Fridrik Thor Fridriksson, tells the story of Margret, a mother who has done everything in her power to help her son. Keli is eleven years old and is severely autistic - his mother doesn't even know if he understands Icelandic, let alone other languages. Even if Margret holds no unrealistic expectations on behalf of Keli, she has the quenchless thirst for knowledge about the mysterious and complex condition that autism undeniably is. Along they way, Margret meets other families and hears their unique stories about how they too have been touched by autism.

On a course set to include the United States and Europe, she meets with scientists in the field of autism and autism therapies and the parents of autistic children who share her passion: to break down the wall between the children and the surrounding world. This journey becomes lengthier and more dramatic than she envisioned at the start. During the trip, she catches a glimpse of hope that her son can be helped to a larger degree than previously assumed.

Perhaps it is possible to break down the wall of autism and get to know the individual behind it? 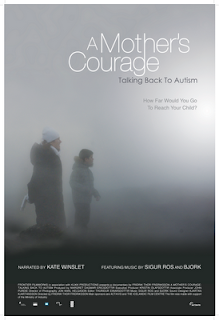 Oh, wow. I'll have to look out for that one. Steve works with autistic children. I can't imagine how difficult it must be. Someone I know once described Down syndrome as the "Cadillac of disabilities," and I think he's definitely right about that!