this is our second week using cloth diapers. when i told people that i was thinking of using cloth diapers, i got mixed reactions to say the least. when i became pregnant i considered using cloth diapers at first. of course as time grew closer to giving birth i thought disposable would be way easier. after a couple of months i started thinking a little more about how many diapers maya uses, not to mention the amount of money we spend to supply them. i started thinking that it would be worth a try. the idea of going cloth really didn't scare me as far as cleaning up the poop it was the extra laundry that i was worried about.

well i'm happy to report that it's not a pain at all to do cloth. first off i love the feel of these diapers, they are super sturdy and have plenty of cushion to them. washing them isn't a hassle at all since now a days you don't have to soak them in any kind of solution before washing them. i just throw them into the washer before i go to bed and then into the dryer afterward. i really think it's worth it because i've thought about the hundreds if not thousands of diapers that maya would be sending to the landfill. it might take more then 500 years for those things to disintegrate with all the chemicals and plastic involved. 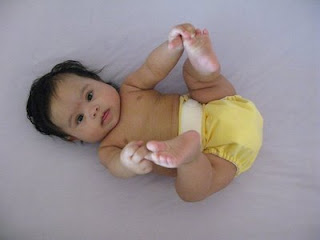 evidently there are tons of different styles of cloth diapers now a days. they can come as basic as the old fashioned pin kind or fitted ones that have snaps and velcro. for a couple of weeks i did research on the web about these and i found this awesome site that really sold me on the idea. the owner has a great faq and relieved my feelings of it being a hard task. now don't get me wrong it is a little more effort then disposables. the fact is that i have to wash them every night or every other night, dry them and then prepare them before they are good to go. but i really think sometimes a little effort has to be made to make a difference in the world. i'm no saint when it comes to being green, but lately i've been thinking there are little bits here and there that i can do that might just make this world a better place. for now i plan to stick to cloth diapers and hopefully encourage others, by being an example, to do the same.
Posted by evrfwd at 11:27 PM